Lyrics:
Ven A Bailar Conmigo
I wanna dance, I wanna feel
Your body next to mine
Feel the touch of your skin
In every move I feel the beat
In every breath I take

Chorus:
Oh… ven a bailar conmigo
Come dance with me tonight
Let’s feel the beat, feel the heat
You and me

The way you move, the way you dance
Makes me feel alive
I wanna stay in your arms
It’s in your eyes, it’s in the look
That you’re giving me 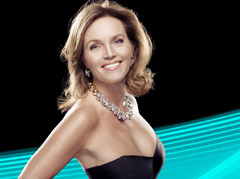 When she was young, Guri Schanke wanted to become an interior designer, but thankfully she could not stay away from the stage for very long. Guri has quite an impressive list of merrits so far in her carriere. She’s been in over 20 plays, musicals and television shows and has held leading roles in Les Miserables, Little Shop of Horrors and Chess amongst others. She has also dubbed cartoons for Disney and she is the official face of Loréal in Norway.
Guri is a dancer, a singer and an actor and over the years she has become a cherished part of Norwegian Showbiz. Her Dancing experience came in handy as she secured second place in the Norwegian edition of Strictly Come Dancing. Guri’s latest achievment, winning the Norwegian Melodi Grand Prix is a lifelong dream come true. The song ”Ven A Bailar Conmigo” meaning ”Come Dance With Me” is written especially for Guri by Swedish composer Thomas G:son, who also wrote the Spanish entry this year. 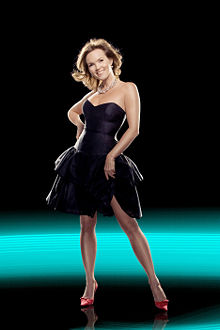 Have won the Norwegian selection for ESC one time:
2007 “Ven a bailar conmigo” – Guri Schanke