Hey guys, you really know what I like – just like that
You know that I’m really fine (I like that)
When it’s raining and bad news is on TV
Don’t get crazy

Let’s party, you got the right to party

Hey guys, you know what turns me on…
– Come let it go baby, let it show baby
Let me know what makes your mind blow, uh
And makes you loose it at night
– Don’t get crazy

You know it’s your right to party

Chorus:
Come with me, because it’s time to party
Join me and let’s go to a party (Come on)
Everybody has a right to party – get crazy
– Why don’t you get crazy, crazy

Come with me, because it’s time to party (Oh yeah)
Join me and let’s go to a party
– You know you really gotta get down
– Come to a party with me
– Just party with me

Every little moment is so special for me
I’m a little bit crazy, crazy, like a baby, uh
– You got it going baby
– When it’s raining and bad news is on TV
Don’t get crazy

Let’s party, you got the right to party

Hey guys, you really know what I like – just like that
You know that I’m really hot
– Yeah, yeah, yeah, you are
– Don’t get crazy

You know it’s your right to party

This is true love, baby, yes, it’s true
You got the loving I need and I always will be there for you
– I’m your baby
– Yeah yeah yeah…
– I’m really your baby, yeah yeah….
– Let’s go

About:
The Jet Set 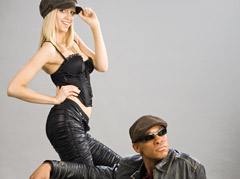 The debut of The Jet Set took place in January 2006. The music of the Jet Set is an interesting combination of the newest trends and a clash of two music cultures- The East and the West. It’s a combination of a splendid voice, youthful energy and talent of 17 year old Sasha who was born in St. Petersburg, Russia and vocals as well as rap performed by David who comes from England. The music of the Jet Set is a mix of R’n’B and rap with elements of pop and dance music.

The group is made up of: Sasha who comes from Russia but has been living in Poland for 15 years and David J from Great Britain who has been very active on the German music market for years and is currently living in Poland.
The premier of the group’s first album titled “Just call me” took place at the end of July 2006. The album has the status of a Gold record.

The Jet Set started on the road to fame during the Polish pre- selections for the Eurovision Festival in 2006, where they came close to winning. The song “How many people” quickly reached the highest rotations on the Hit charts in the whole country. From that moment the popularity of TJS has been constantly growing. The second single “Just call me” also became a hit- the song placed second in the Polish category during the prestigious Sopot Festival in 2006. In 2006, The Jet Set took part in many television concerts and played for many thousands of people. On February 3rd 2007, the group fought to have the honor to represent Poland at the Eurovision Festival in Helsinki and succeeded.

The group was presented during the Music Fair MIDEM in Cannes this year and many representatives of show business were interested in the group for example India, USA and Japan as well as European countries. The release of the record is planned in many European countries and other parts of the world.

Mateusz Krezan
Mateusz Krezan – composer, Music Academy graduate. He was raised on classical , jazz and gospel music. He has written many hits that were sung by many singers. His compositions have repeatedly received awards on music festivals and his songs were also used in movies.

David Junior Serame
David Junior Serame sings in The Jet Set and also writes lyrics. He comes from England. He sang in the Audry Motaung African Heritage Choir and in the jazz band Ghee Spot. David also cooperated with Missy Elliot, Mouse T, Bootsy Collins, Dante Thomas, Joy Danalane. In 2004, together with two friends he created a production company in Germany – “Floatin’ Disasta” that specialized in rap and hip hop and David Junior Serame wrote songs for German rappers. In 2005, he was invited to join couple of German artists to record a charity song for the Tsunami victims and all profits went to those in need.

Kamil Varen
Kamil Varen has many hit songs under his belt that were performed by different singers and music groups, including hits that were at the top of the hit charts for many years. Many of his recordings received awards. Currently he is writing lyrics for The Jet Set.