Everywhere around the world ‘I love you’ it means the same
Everyday and everynight only you cand touch my flame
So take my heart, take my soul, everything of me
Everywhere you go my baby, even Italy.

About:
Bogdan Taşcău aka Mister M – THE SPANISH 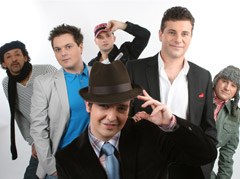 Bogdan attended the keyboard section of People’s Art School in Bucharest and he is a graduated actor. At present, he attends the classes of the Faculty of Communication and Public Relations (SNSPA) as a second year student, but he is obviously mainly focused on music. Both as a singer and as a manager or composer as well, Bogdan was lucky, finding the right solution to changing a song, a band or a musical project into a success.

In 1995, together with one of his best friends, Sorin, Bogdan initiated one of the first dance bands in Romania – MB&C. In 1996, MB&C released the first album of dance music in Romania, “Romanian Jungle” and a year later he would participate in one of the most popular musical events of that period, Radio Contact Galas. The band released 3 albums between 1995 and 2000 and after that, Bogdan made his option for a solo career, under the name of “Dl Problemă” (“Mr. Problem”). A very successful period followed again for Bogdan, who released, in the years 2001-2004, 3 albums.

In 2006, Bogdan’s composition activity was awarded with the Prize for Artistic Excellence offered by the Foundation “Ion Voicu” in Mamaia Festival, in the creation section, with the song “Muza mea” (“My Muse”), interpreted by his two good collaborators and friends, Andrei and Kamara (that is AlbNegru).

What else could be said about Bogdan? Without his girlfriend Elena’s insistence, “Liubi, liubi, I love you” would have never been finished and neither would it have got to represent Romania at Eurovision Song Contest 2007. Elena was the one who believed in this song just from the beginning and who encouraged Bogdan, Andrei, Kamara and Vlad to give it a form that could win the Romanian public and would open their way to Helsinki.

Vlad Creţu – THE ENGLISHMAN
Born on March 14th, 1982, in Bucharest, Vlad attended the courses of People’s Art School, graduated the Music Highschool George Enescu and afterwards the Academy of Music, while dedicating himself to guitar.

He was one of the founders of the band Supermarket, and he released two albums and launched four singles with them. With the song Te iubesc (I Love You), Vlad and Supermarket were awarded two important prizes – the Trophy of the National Love Song, in 1999, and the first place in Mamaia Festival, in „Rock” section, in the year 2000.

Presently, he is collaborating with the band Hara (guitar and voice) and he makes the orchestration, as a member of Code Studio team. He collaborated with a countless range of bands in terms of orchestration, including Alb Negru, made up of Kamara and Andrei Ştefănescu. Vlad collaborates with the National Theatre “I. L. Caragiale” from Bucharest, but also with the public television, TVR, while co-opted in the team of the programme „Impas” (in the autumn of 2006, on TVR 1).

Kamara Ghedi – THE FRENCHMAN
Kamara was born under the sign of Pisces,in Romania, from a Romanian mother, descending from Filotti family, and his father originating in French Guinea. After his father’s death, the family moved to his country of origin, where Kamara lived until being 22. In 1997, he returned to Romania to study journalism in Cluj. In that period, he divided his time between school and football training, until he got a scholarship and came to Bucharest. Here, he met his wife. His passion for football brought him not necessarily a sporting career, but the chance to make friends, like Andrei Ştefănescu. Kamara and Andrei founded a band, Alb Negru, and they released their first EP in 2004 – “En garde”. In fact, the man who discovered the two boys was “Mister M” (Bogdan Taşcău), the Spanish guy from the group. Concerts started to come for AlbNegru, the band making a real “feat of strength” all around the country, in one year and a half.

“Senseless “, the song that promoted the second recorded material (“Passion” – 2005), consolidated the band’s position on Romanian musical market and drew the attention of radio stations from Turkey, Spain and France. There, the song is still being broadcast. Andrei and Kamara, these two former professional football players, who have chosen “mike’s way”, have demonstrated that they are very gifted and, consequently, the present time seems to be really promising. The summer of 2005 brought them a participation in Mamaia Festival and the Prize for Artistic Excellence awarded by the Foundation “Ion Voicu”, for the song “Muza mea” (“My Muse”), composed by Bogdan Taşcău.

In the autumn of 2006, Kamara and Andrei released their third album, “Hello”, in the same style that made them famous.

Andrei Ştefănescu – THE ROMANIAN
Andrei is the other half of the band AlbNegru and the Romanian guy from the band that represents our country at Eurovision 2007. A football fan, as well as his stage “mate”, Kamara, Andrei hates violence against animals and wickedness, in general. He admires personalities like Sharon Stone, Mariah Carey, Michael Jackson, and his favourite cartoon is „Ice Age”.

Andrei met Kamara in 2002, when the latter joined the national football team of artists. Their first song was entitled Noi doi (The Two of Us). In 2004, they launched their first record, “En garde”, which confirmed the appearance on the musical market of the group that „Mister M” (Bogdan Taşcău) had discovered several months before. Concerts came up quickly, so the band made a real “feat of strength” all around the country in its life of one year and a half.

Fără sens (No Reason), the song that promoted the second recorded material (“Passion” – 2005), consolidated the band’s position on the Romanian musical market and drew the attention of radio stations from Turkey, Spain and France, where the song was broadcast. Andrei and Kamara, these two former professional football players, who have chosen “mike’s way”, have demonstrated to be very gifted. In the summer of 2005, they participated in Mamaia Festival and they won the Prize for Artistic Excellence awarded by the Foundation “Ion Voicu”, for the song Muza mea (My Muse), composed by Bogdan Taşcău.

In the autumn of 2006, Kamara and Andrei launched their third album, “Hello”, keeping the style that made them famous. For this album, the two young men collaborated with well-known bands and Romanian artists like Blondy, Andra and ASIA.

Ciro de Luca – THE ITALIAN
Ciro de Luca was born in Napoli, in 1970, from an Italian father and a Romanian mother. His relation to Romania has been built all along his childhood, being educated both by his parents and by his grandparents (his mother’s parents).

As a teen-ager, enchanted by the artistic life, he collaborated with a television station in Napoli for an entertainment program called “If everything goes well, we are ruined”.

At 18 years old, he entered the Carabineers Academy and after graduating, he served as an officer for 11 years. All this time, he didn’t give up his passion for music and performance, collaborating with many artists from the musical and theatre world.

While participating to different shows, he was noticed by Enzo Mastroianni, cousin of the famous Italian actor Marcello Mastroianni, who helped him to become more and more famous.

Fond of poetry, he wrote verses and lyrics for many artists. In 1999, he decided to dedicate to his own artistic career, giving up his job as a carabineer. With the help of Jean Cheptea, composer, he participated to the Light Music Festival from Amara, followed by a tour at the seaside. There, he met the actor Alexandru Arşinel, who offered him a partnership with the revue theatre “Constantin Tănase”. In 2003, he participated to the Festival di Napoli, getting into the semifinals, and a year after that, in 2004, he signed his first contract with a production house, which released his first album on the market, called “Sole, cielo e mare”, appreciated by the public.

A range of countless tours around the country followed and he participated to well-known festivals such as “Crizantema de Aur”, from Târgovişte, where Ciro entertained the public with Napoletan canzonets, performed together with the Big Band of Romanian Radio Corporation, conducted by Dan Ardelean.

In 2005, he released his second album on the market, entitled “Amore e Gelosia”, including the song “Danceamore”, promoted with a video clip on music channels.

The year 2006 brought his third album to his fans, entitled “Una Nota di Passion”, where he published a remake of the video clip of “Danceamore”, a song that, meanwhile, registered a huge success.

In 2006, Ciro signed a contract with the international house of records “LIVEMUSICEDIZIONI”, a production house also collaborating with Nino D’Angelo. The contract brought him an immediate release of the maxi-single “Danceamore”.

This event has been the highest professional accomplishment for Ciro and for this he deeply appreciates the people who have supported him: Domenico Albanese (producer and manager) and Nino D’Angelo.

Valeriu Raileanu – THE RUSSIAN
Valeriu was born in Ukraine, at Lucovi, on July 21st, 1973. He spent his childhood and adolescence in Cernăuţi, where he graduated middle school, music school and the Technical College. Being fond of music, dance and sports since childhood, Valeriu participated in many competitions, while also trying his skills in poetry.

His departure for studies, at Technical College, prevented him from going on with his artistic interests, thing that he regretted a lot. “I haven’t mounted on a stage for 20 years, but in my heart I have always sung”, said Valeriu, recommended by his band colleagues as a great oratorical talent.

In 1993, he came to Romania, and he attended the Academy of Economic Studies and the Faculty of Law in Bucharest, in order to improve his knowledge in the legal and economical field. At the same time, he was involved in the activity of several student associations, always being part of the leadership: president of the Club of the Students from Northern Bucovina, director of the Cultural Department in the association „Members of University for University”. He took part in many cultural events organized by the University, Presidency, different ministries, Umnifest, Education Fair, Arc Programme etc.

Valeriu is not only an inborn artist and leader, but also a skilful entrepreneur. While for several years he collaborated with various TV stations as a translator, in 2004, he decided to establish his own translation company. He translated, from Russian to Romanian, the oath of the Ukrainian president Yushchenco, articles and speeches of the Russian president, Vladimir Putin, of some famous personalities from the Russian-speaking environment like Abramovici, Ahmetov etc. He provided translation services for important events, press conferences and even for football games.

But his greatest dream, that of getting on the stage to sing again, was fulfilled in January 2007, when Kamara suggested him to come and give a trial for the song that the band was to enter for Eurovision national selection. As everything went very well, Valeriu remained in the band.