Lyrics:
We’re standing in the rain
And sipping cold champagne
The night is full of angels of sin –
The demons of pleasure and pain 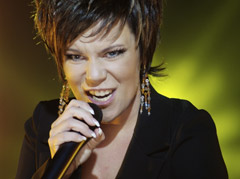 Gerli Padar has been under discussion fairly much, both in Estonia and abroad. She started to sing in early childhood; victories in the song contests of the Estonian Television, “Laulukarussell ‘94” (“The Roundabout of Song ‘94”) and “Kaks takti ette ‘97” (“Two Times Forward ‘97”), brought along recognition. Gerli has studied in Jazz Gymnasium in Sweden. She has sung twice (1999 and 2002) in the Estonian national final of the Eurovision Song Contest. Gerli has played the leading roles in the musicals “Cabaret” and “Chess”. She has participated in many a gala performance: A. L. Webber’s gala, “Memory”, the Opera Gala, performed together with the Estonian National Symphony Orchestra. She has hosted many TV shows and danced to the final of the popular TV show, “Dancing with the Stars”. She is bringing up a 2.5-year-old daughter, Amanda Rebeca.

Backing vocals will be sung by the pupils of the singing studio of the Estonian Television, Mirjam Mesak and Johanna Münter, having participated several times in the song contests of the ETV.

Together with Gerli, also the best Estonian competitive dancers, Martin Parmas, Aleksandr Makarov and Marko Kiigajaan, having won a number of medals in World Championships, European Championships and World Cups, will be performing.
Hendrik Sal-Saller
Hendrik Sal-Saller is the most successful Estonian songwriter of the past decade formed his first rock band at the age of 15 and has been involved in music and composing it through and through ever since. By now, over 200 songs are credited to the man, most of which have been big time hits in national radio stations. Hendrik’s last and also the most wanted Estonian band, The Smilers (www.smilers.ee), was born in 1993, and is alive and kicking to this day: 10 albums have come out, over 100 live performances are given every year, and they have won countless prizes bearing different names, such as the Golden Disc, Artist of the Year, the Best Radio Hit, Author of the Year, etc. In addition to that, Hendrik has composed music for and been a producer of many other Estonian pop and rock stars and, from time to time, he has been seen singing in the company of Estonian Dream Big Band and The 21st Century Orchestra.
Berit Veiber
Having been engaged in active sport for a half of her life, Berit, with her economic education, is a “newcomer” to the Estonian music business. Her entry to the local music market has been a success – lyrics by her, in both Estonian and English, have been sung by many a local pop star.

The lyrics of this year’s Estonian Eurovision song, “Partners In Crime”, have caused certain excitement in the audience as to what the story is about: forbidden love, a one-night stand, or rather something criminal? To find the answer to it, the author of the lyrics lets the listener decide…
Dancers
Martin Parmas is studying simultaneously in the Faculty of Law of the University of Tartu and in the Department of Choreography of the Faculty of Fine Arts of the Tallinn University on the specialty of competitive dance trainer. He has been engaged in competitive dance for 16 years (with his partner, Kaisa Oja).
International class in amateurs (S); belonged to the Estonian team up to going professional.
He has won 9 gold, 11 silver and 6 bronze medals in amateurs in Estonian Championships.
He has represented Estonia in international title contests (World Championships, European Championships, World Cups) 10 times, while making it to the semi-final three times among the best 12 pairs.

At the moment, Martin is an active professional dancer and a trainer in the Tartu Competitive Dance Club “Stiil”, the Aerobics Club “Rütmika”, and the trainer of the Can-Can Group. Since 2006, he is a teacher in the Dance and Ballet School of the Vanemuine Theatre. He was the finalist in the TV show, “Dancing with the Stars”, together with the singer, Gerli Padar.

Aleksandr Makarov is studying international relations at university, as well as competitive dance, in which he became involved at the age of 7, being at top level for the past 10 years. He has represented Estonia in World and European Championships several times.
His best results:
Fivefold Estonian Champion;
Winner of the International Championship Under 21;
2nd place in the Blackpool Dance Festival U 21;
Twofold absolute winner in the Estonian Adult Cup events;
Multi-finalist of the World Cup events;
Second place in the Nordic Championship.
He is now active as a competitive dancer and is constantly going abroad for self-education by the best teachers. For the past four years, he has been teaching children at top level in the Competitive Dance Club “Leevi”.

this is exellent LOLOL the sure winner as long as there is not another eurovision fix, i love this tune and what a cutey the singer is, i will have to arrange dinner with her.

good luck Estonian entry from England (its better than ours)