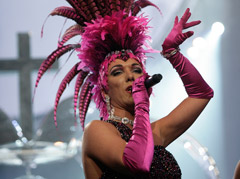 – Winning Danish Song Contest really inspires me to write and perform with more songs like “Drama Queen”. After the victory I thought: “Now I have made something, that people like. I bet I can do that again”…

Right now it’s party full-frontal and fast forward like never before for the winner of the Danish Song Contest 2007, DQ (Drama Queen) alias the 34-year old singer and entertainer Peter Andersen from the southern part of Zealand, Denmark.

So far he hasn’t yet realized, what the victory will lead to – and what it can be used for. But he knows so much, that an album has to be ready before The Eurovision Song Contest in Helsinki with semifinal on Thursday the 10th of May and final on Saturday the 12th of May. At that this album will contain not only the Song Contest-winner, but also a lot of other songs in the disco/pop style. – I have intentions of following the process all the way and contribute to songs as well as lyrics. When it comes to lyrics I find it important, that they have something, that I can relate to.

And DQ have to start from scratch – with no old songs and lyrics hidden in his drawers. But so far he keeps cool. A couple of songwriters already have promised to write songs. And DQ himself knows what it takes to go further. For the last 10 years he has been a rather significant part of Danish show business.

Originally, Peter Andersen is educated hair dresser from Copenhagen – but after having worked as a hairdresser for almost a year he chose to make singing and performing to more than just a hobby.
– I have performed in various rockbands, and back in 1997 a girlfriend called me to ask if I wanted to perform in her trio, Naughty Voices: “It’s four to five easy songs for four to five easy voices. But you have to wear a dress – because it is a drag show”, she told me. “No way”, I said.

At first, Peter Andersen found it hard to imagine himself performing in a dress – but he got used to it. So quickly, actually, that he – after a short period with Naughty Voices – went on to perform as singer in another band, Tina Turner Jam (later called Turn on Tina) with nothing but well-known Tina Turner hits on the repertoire.
– At first I had a picture of myself singing Tina Turner hits just like that, but the band went on teasing me so much that I chose to put on the wig, the dress, the stiletto heals and the make-up. But I don’t consider Turn on Tina to be a drag show – in Turn on Tina I’m playing the role as Tina Turner.

Every month Peter Andersen is performing from six to eight times, partly in Turn on Tina and partly in his own dragshow. And in Denmark he is already famous for changing costumes up to 13 times during a one hour long show, this enabling him to copy well-known female singers like Tina Turner and Cher and Danish stars like Birthe Kjaer and Sanne Salomonsen.
– One song in particular is very famous among the audience, because it is considered to be a Danish classic, a winner of the Danish Song Contest and third place in the ESC in 1989, “Vi maler byen roed” by Birthe Kjaer. The sight of me coming onto the stage in red dress is sometimes enough…
– In Naughty Voices we performed in ugly and ”trashy” clothes. Today I can not have enough feathers and spangles and colorful costumes. I want to go all the way…!.

Peter Andersen does nothing whatsoever to hide the fact that he really enjoys standing on a stage performing – and watching the reaction from the audience. And that he has quite a lot of expectations, when it comes to people’s reaction to “Drama Queen” and other songs performed live.
– The song about “Drama Queen” is not about me being a woman or a queen creating drama, but describes my role on the stage. As Drama Queen.

DQ (Drama Queen) alias Peter Andersen is 34 years old, born in Koege and brought up in Borup in the middle of Zealand. He moved to Copenhagen as a grown-up. After 10th grade he is educated in HH from Roskilde Handelsskole. Military service for nine months in Sjaelsmark. Educated hairdresser since January 1998. Has performed in various rockbands – and in 1997-99 in his first drag show, Naughty Voices. Singer in another band, Tina Turner Jam (later called Turn on Tina) since 1997. Has performed with his own dragshow since 2002. Married to Lucas (since 2005) and has to Chihuahua dogs, Tyson and Chilie. Has so far put out one single, “MissTerious” (1998) and participated in two albums, “Rock’n Dance” and “Danmarks bedste kopier” (“Denmark’s best copies”) (from 2000).
Songwriters

Peter Andersen wrote the song in collaboration with Claus Christensen – a fellow vocalist from the in-studio vocal group of the DR entertainment show “Foerstevaelger” / “First Choice” – and another colleague, Simon Munk.

In addition to his vocal performances on “Foerstevaelger”, Claus Christensen is also a songwriter and producer for several popular Danish bands such as “Blaa Oejne” / “Blue Eyes”, Soap and Creamy.

Simon Munk dedicates much of his time to his video production company, Konsensus Film, but has also appeared on stage in the Danish Melody Grand Prix in 2001, performing the song “Mit hjerte det banker” / “My heart beats” with co-vocalist Anita Lerche.

what a wonderfull song

shame u easteurope for bad voting for this favorite

DQ I LOVE YOU

YOUR AMAZING..I LOVED YOU EVER SINCE I SAW YOU ON TV. YOU SHOULD HAVE ONCE EUROVISON!

I DO DRAG MYSELF (kinda Am-Dram) WOULD LOVE TO BE LIKE YOU!! YOUR GORGEOUS!