Lyrics:
Love Or Leave
Stars in the sky
When the shadows fall, when the sunlight dies
Empty streets are filled, with the pale lamplight
We are just two lonely shades, walking in the night

Words lose their sense
When I feel you near, when I touch your hands
I’m trying not to think that at break of dawn
You’ll be gone and I’ll be lost, numb and all alone

Weak and unwise
I betray all fears that I should disguise
Melting in your arms, I fail to realise
Why the mornings always change the colour of your eyes

When the morning comes, I’m all alone
Every time at break of dawn

2 x Chorus:
Love or leave, I’m with and without you
How come I am up to this senseless game?
How could I stop thinking about you?
Love or leave, don’t play with my heart again 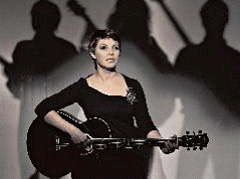 The 4FUN was formed in 2001 when Julija and Laimonas separated from a well-known Lithuanian blues band “The Road Band”. It took a couple of years to make the band a stable one. Justas and Andžej joined 4FUN in 2002. Rimantas joined the band in 2006 (though in 1996-1997 Julija and Laimonas used to play together with him in “The Road Band”). The 4FUN performs in music clubs and participates in different music events and festivals throughout Lithuania and Europe.

In 2003 The 4 FUN won an LCMA (Lithuanian Country Musicians Association) award “LOVE 2001-2003” for the best debut of 2 years. In 2004 at “Visagino Country” (international annual country music festival, Lithuania) the band got a special prize “Auktaitijos dvasia” from the sponsors of the festival. In 2004 The 4FUN released the first CD – a live album “Gyvas” (which means both “Alive” and “Live” in Lithuanian) – it was a record of a live performance on Lithuanian National Radio.
Julia Ritčik finished a piano class speciality at a music school. She started her singing career in 1994 in a well-known Lithuanian blues band “The Road Band”. She sang with it for longer than 6 years and recorded together 6 albums. In 1995 – 1997 Julia took part in a project “The Acoustic Trio” (V. Jutas, J. Ritčik, A.Belkin ) and together with it recorded an album in 1995. She also sang for 5 years with “The Country Blues Session Band” (CBSB) lead by a well-known Lithuanian composer and fiddler A. Klova, together with this band she recorded an album in 2001. In 1999 Julia with CBSB participated in the biggest in Europe Country songs competition “Country Europe” in Mrągowo (Poland) where the band won the second award (Julia sang both contest songs; one of them was her original composition “Ant Krantų”). 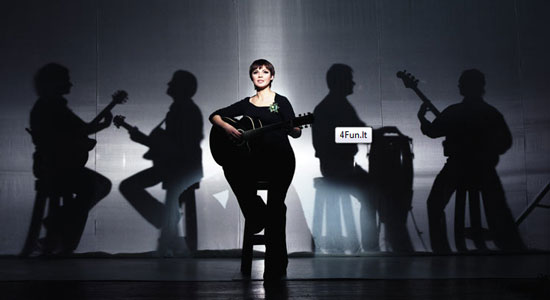 In 1998 Julija won an LCMA (Lithuanian Country Musicians Association) award as the best singer. She is included into 2002 catalogue “Who is who in Lithuania” (Lithuanian edition).

Andžej Zujevič finished a piano class at a music school. In 2003 he graduated from Vilnius Conservatory guitar faculty (he was a disciple of a famous Lithuanian musician and guitar teacher Stasys Daugirdas). At the moment he is a student of Vilniaus Music and Theatre Academy guitar faculty, this year he’s going to graduate with a bachelor degree. In 2004 Andžej won the first prize in Vilnius guitarists competitions. He also performs in music clubs with various jazz projects and is invited for recording in studios a s a session musician.

Justas Jasenka has dealt with music since he was a child. He finished a piano class at a music school. His guitar teacher was a well-known Lithuanian blues guitarist Vladimir Kaplan. Justas also studied acting in Vilnius Music and Theatre Academy.

Laimonas Staniulionis finished a trombone class at a music school. Then he studied drums in Vilnius Conservatory, played in a rock group “The Endless Way” and participated in several youth jazz-rock projects. Later Laimonas continued studying drums in Guildhall School of Music and Drama in the UK. After he came back to Lithuania he played in “The Road Band” for four years, recorded 4 albums with it and participated in many festivals. Laimonas also played drums in “CBSB” and recorded one album with it. Laimonas is a member of LCMA, at the moment he holds the post of the assistant director of the Association. Laimonas is also the manager of The 4FUN.

Julia was great at Eurovision, the song is touching hearts.
With wishes of success
Maryna from Belarus