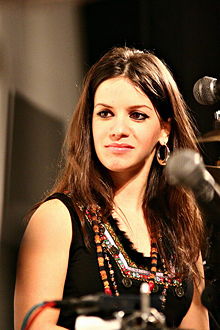 Elitsa Todorova (Bulgarian: Елица Тодорова) (born 2 September 1977) is a Bulgarian folklore singer and professional percussionist. She has worked with a number of noted choirs, ensembles and musicians (Bulgarian and foreign) and has participated in concerts in a number of countries. She has also been awarded several prizes.

In 2003 Elitsa Todorova began working with Bulgaria’s most popular and renowned drummer and percussionist Stoyan Yankoulov. The unique Elitsa Todorova-Stoyan Yankulov Duo turned into a phenomenon in no time. Their high professionalism and perfectionism underlies all their performances.

On 25 February 2007, Todorova and Stoyan Yankoulov’s song Water won the Bulgarian National Television’s public contest and was selected as the song to represent Bulgaria in the Eurovision Song Contest 2007.
Contents

Style
Elitsa develops a style of her own
Elitsa Todorova develops a percussions-playing style of her own, combining quick ostinate rhythms on the tarambuka with synchronized playing and singing. The result is a mosaic of unique vocal movements and impeccable musical improvisations. She plays traditional percussion instruments in a most non-traditional way. The young singer easily mixes traditional folklore with jazz, drum and base, ethno-motifs, classics and spontaneous improvisation. The result is fascinating. A magnetic voice and percussion tell us their folklore-jazz story. In her repertoire Elitsa plays instruments like the tarambuka, drums, maracas, claves, old silver coins, shepperd’schimes, horses’ bells, a magical thunder-wand, guiro, chimes, but of all musical instruments the best, in her opinion, is human voice. Through combining authentic Bulgarian folk songs with the energy of percussions Elitsa Todorova presents in a most touchng way the core, the potency and the emotional power of Bulgarian culture.

Philanthropy and other activities

Elitsa Todorova has been given the following awards:The Golden Phenomenon statuette for 2005, for her phenomenal achievements in the field of the singing and performing arts and for promoting Bulgarian culture around the world; A Honorary Diploma from the Republic of Austria’s Embassy for her great contribution to popularizing Bulgarian Jazz music to Austria within the Step across the border 2005 European Program. 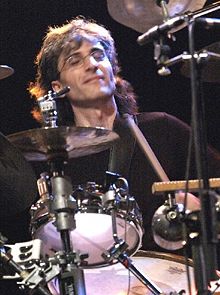 In 2003 he initiated a project of joint performance with an extremely talented folklore singer, Elitsa Todorova. The unique duo turned into a big-time success with their very first team performance. Their high professionalism and perfectionism, and their dedication to the music and rhythm, have been hallmarks of all their performances.

On 25 February 2007, Todorova and Stoyan Yankoulov’s song “Water” won Bulgarian National Television’s public contest and was selected as the song to represent Bulgaria in the Eurovision Song Contest 2007, to be held in Helsinki, 10-12 May.
Contents

Yankoulov graduated from the musical school “Lyubomir Pipkov” in Sofia and then from the State Musical Academy “Pancho Vladigerov,” majoring in percussion instruments. He has played with rock and jazz bands, folklore ensembles, and jazz-rock and fusion bands. He has also taken part in many folklore and jazz festivals across Europe and in the United States.

Yankoulov showed interest in percussion instruments at a very young age. At the age of 10 he was the youngest drummer in his town’s brass band (Elin Pelin). Meanwhile Stoyan formed an amateur pop-rock band called Astronax (Bulgarian: Астронакс) in which he played drums. Their repertoire included songs by Supermax, Kiss, Deep Purple, Uriah Heep, Shturtzite, FSB, etc., but no original songs. His time with the band helped develop his sense of rhythm and gave him the confidence to be the spine of his group performances. Already engulfed in the world of percussion, Stoyan also continued piano lessons, which he had begun at age 8.

His first professional appearance was in the jazz-rock fusion band Tact (Bulgarian:Такт) with Yavor Dimitrov (piano) and Nelko Kolarov (guitar). After the group broke up, he played in several professional bands during his secondary education. When he had barely started his higher education, Yankoulov joined the Big Band of Bulgarian National Radio, in which he played for seven years. Playing in many jazz formations, he quickly got into the swing of jazz music and became a regular performer in major jazz festivals in Varna, Apollonia, Plovdiv, Rousse, etc. His professionalism immediately drew the attention of musicians’ society; Yankoulov received numerous invitations to collaborate on performances and recordings, and he declined none of them.

Yankoulov spent the longest time of his career in the band Zone C, founded in 1994 with Vesselin Vesselinov-Echo (bass) and Vasil Parmakov (piano). Misho Grozdanov, Vladko Karparov (saxophone), and Ateshghan Yuseinov (guitar, tambura) joined the band later. Stoyan Yankoulov formed a duo with Theodosii Spassov (kaval), and later, together with Anatoly Vapirov (saxophone), they laid the foundations of the Fairy Tale Trio.

In 2000 Stoyan Yankoulov’s musical career took an unprecedented upturn when he met the Bulgarian folklore singer Elitsa Todorova at a Bulgarian music festival held in Canada. They quickly exchanged ideas about their common interest in percussion instruments, fast electronic beats, and dedication to Bulgarian folklore. Three years later the Elitsa Todorova-Stoyan Yankulov Duo was a fact. The synergy between the two musicians was visible in their very first live performance, and they quickly won many admirers. The unique Bulgarian duo combines rhythms from all over the world with authentic Bulgarian folklore, jazz, and world music. Their concerts always turn into exciting spectacles for the audience’s senses and souls.

Yankoulov develops the art of playing drums and other percussion intruments by applying new techniques and non-standard musical ideas. He experiments widely, even using an old tractor motor. Playing on a couple of instruments at a a time, Stoyan creates an orchestral sound that can make listeners believe that more than one percussionist is playing. His live performances are always big, spectacular shows. He undertakes large-scale musical compositions, including acts of DJs and various performers.

Yankoulov received the Crystal Lira award for 2004 in the Jazz category, awarded by the Union of Bulgarian Music and Dance Activists, Classic FM radio, and the National Centre for Music and Dance at the Ministry of Culture. For his spectacular performance on the Panorama of the First Bulgarian Jazz Music Week Outside of Bulgaria, he was awarded an honorary diploma by the Embassy of the Republic of Bulgaria in Austria. The Bulgarian National Association “Phenomena,” a collective member of the International Informatization Academy, honored Stoyan Yankoulov for exceptional contributions in the field of art and popularizing Bulgarian culture all over the world.

HELLO ELITSA ! HOW ARE YOU? YOUR SONG ITS THE FIRST.YOUR IS A VERY VERY BEUTIFULL GIRL.PLEASE GIVE ME YOUR EMAIL! PLEASE! MY EMAIL IS (hiphophopas@hotmail.com)

Hello Elitsa ! 🙂
I’m from Bulgaria.
But i live in Sweden 😛
I did rely like your song 🙂
I did’nt like that you loosed 🙁